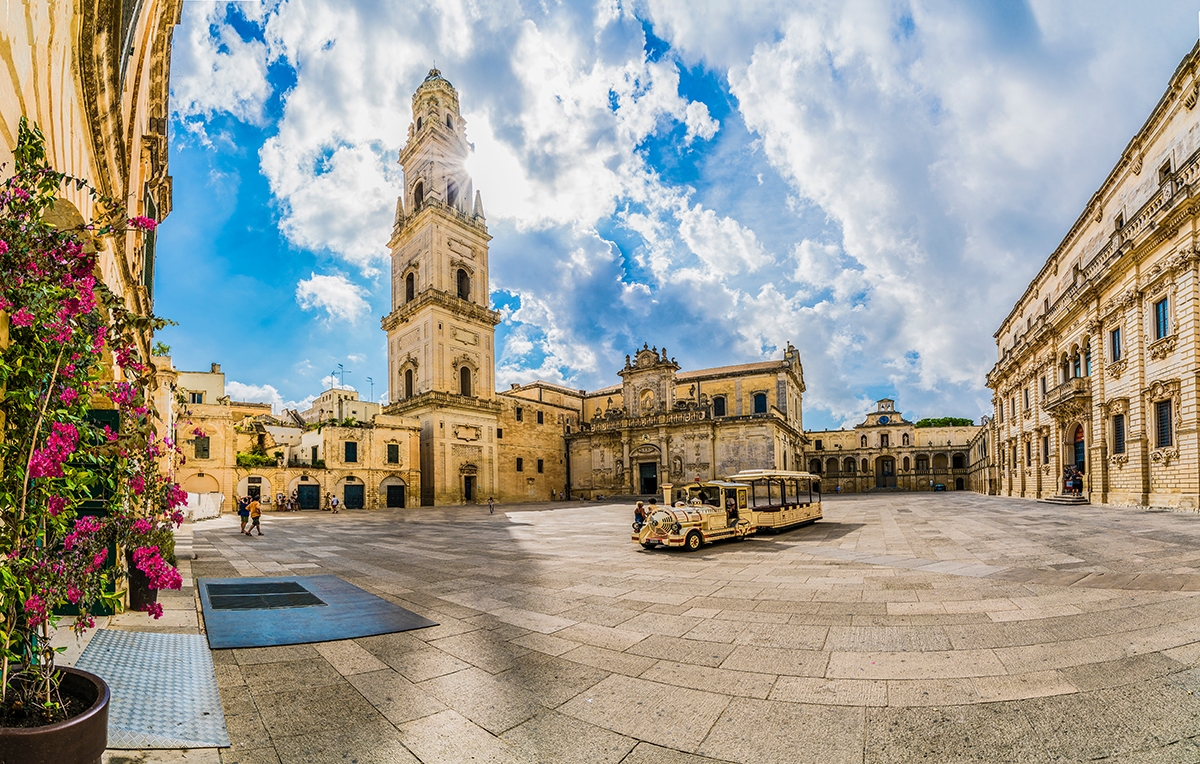 Capital of the province, Lecce is a city of so ancient origins as to be unknown. Several times have come to light, in the city, settlements, necropolis and stretches of walls of the Messapian period.

Lecce, in Puglia, is one of the most beautiful cities of art in Southern Italy. Known as “the Florence of the South”, Lecce knows how to amaze and fascinate tourists and visitors. Its ancient Messapian origins and the archaeological remains of the Roman domination are in fact mixed with the richness and exuberance of the baroque, typically seventeenth-century, churches and palaces in the center.

According to legend it was founded by Malennius, the first king of the Salentines, son of Dasmnus, descendant of Minos. After the Trojan War it was occupied by Lictio Idomeneo, who would give the city its name and introduce Greek culture.

The most reliable information begins at the time of the Romans, when the city was called Lupiae and began a continuous rise (coinciding with the decadence of nearby Rudiae), which was notable in the imperial period. The Romans fortified it and connected it to Brindisi; its Port Hadrian (now San Cataldo) became an active trading port. Under the Normans it lived a period of splendor; it was preferred by Frederick of Swabia, who named it caput Apuliae. In the late Middle Ages, it became a county of the Brienne and the Enghien, and went through one of the most prosperous periods; Maria d’Enghien gave her the famous Statutes. With the destruction by Otto IV, the city passed to the Aragonese. The period of greatest splendor for Lecce was the one that goes from the sixteenth to the seventeenth if. when the city was embellished with Renaissance and Baroque buildings.

Lecce is a city very pleasant and rich in works of art: its artistic and monumental heritage preserves traces of the Roman era, some testimonies of the Middle Ages and Renaissance; mostly the Baroque style predominates here, accomplice the crumbly local stone easily workable and warm heat, had such singular fruits to authorize to speak of baroque leccese, architecture characterized by the exuberant but very fine decoration embroidered on organisms architectural, often of remarkable beauty.

A century ago Paul Bourget called the city of Lecce paradis du rococò. The Baroque developed in about a century and a half, it was an explosion of creativity, spectacular exhibition, technical virtuosity. Various factors contributed to its birth and development: a period of peace and political stability, the presence in the city and in the province of counter-reformist religious orders, the Spanish mentality and taste.

The historic center of Lecce, preserved intact in almost all, constitutes an architectural and monumental ensemble unitary and noteworthy. A walk in ancient Lecce is a continuous discovery from small to great architectural wonders, from churches to palaces, to small houses of the people. Beautiful in its old town, the city is really enjoyable even in the modern one, between artistic beauties, shops and elegant clubs.

In Piazza Sant’Oronzo, center of gravity of the city, stands the Church of Santa Maria della Grazia (1590). Elliptical in shape, it measured 102×83 meters and could hold over 20000 spectators. Not far away stands the Column of Sant’Oronzo, about 30 meters high, erected by Giuseppe Zimbalo with the fortresses of one of the two end columns of the Via Appia in Brindisi; on top of the Corinthian capital there is the statue of the saint (1739) modeled and cast in Venice.

The seat was built on the site of the pre-existing building adjacent to the church of San Marco (1543) attributed to Gabriele Riccardi, Renaissance style, has an elegant portal on which stands the Lion of San Marco. In via Rubichi stands the Convent of the Angiolilli (1764-1771) seat of the Town Hall, later the Church of Jesus (1574). You reach Piazza Sigismondo Castromediano with the monument of the same name. From Piazza Riccardi you reach the Basilica of Santa Croce, symbol of the Lecce Baroque (1548-1646).

Tronati on Piazza Sant’Oronzo, continuing along Via Vittorio Emanuele, you reach the church of Sant’Irene, continuing you reach Piazza Duomo.

Of great visual impact are, then, the Porta Rudiae, surmounted by the statues of the Patron, of Saint Dominic and of Saint Irene, and the Church of the Rosary, with its accentuated verticalism and the splendid facade.