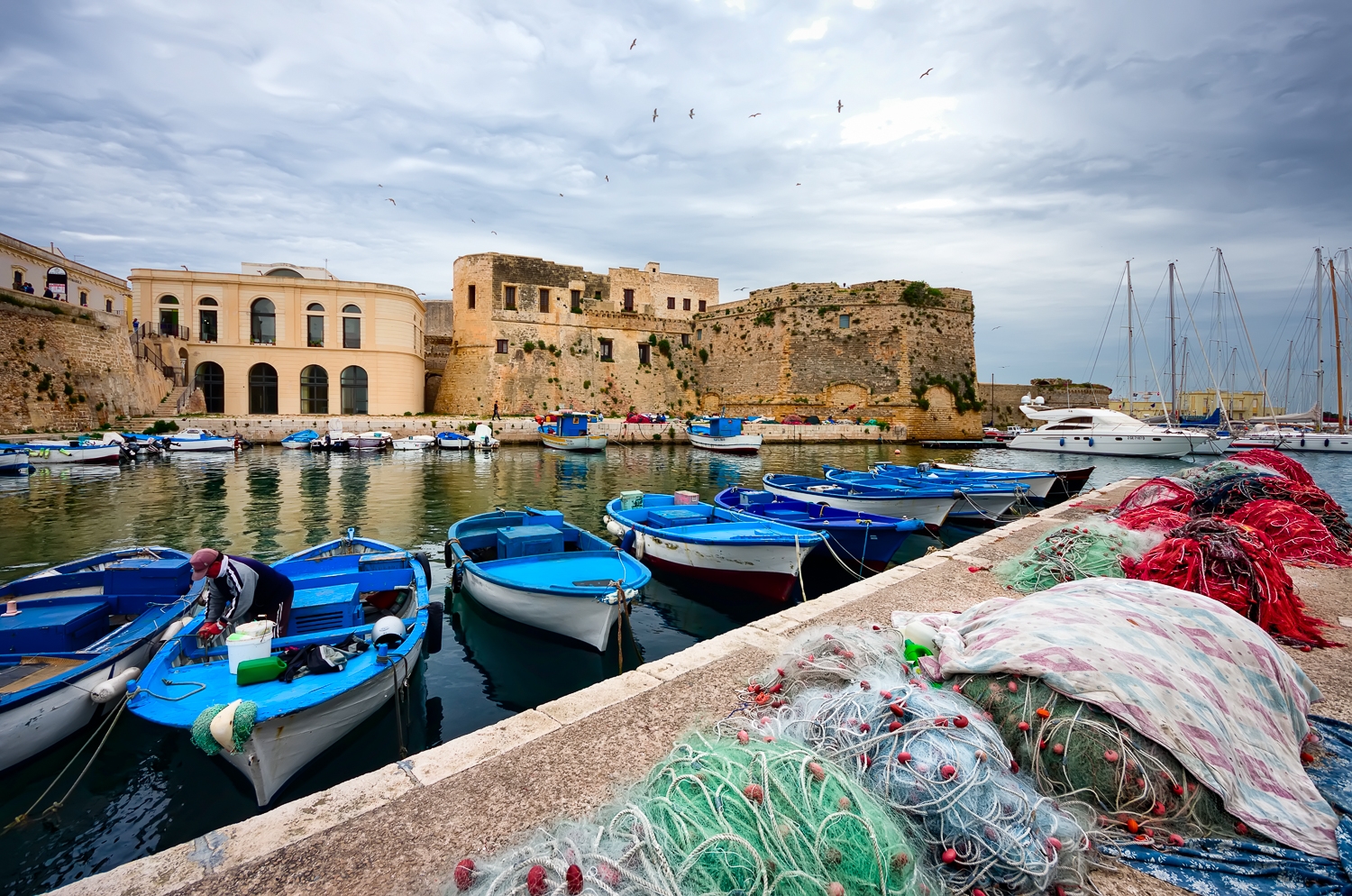 Gallipoli, in the Ionian Sea consists of a modern part (the Borgo or New Town), to the east, on a promontory. And also an ancient part (Old Town), to the west, built on a limestone rock isolated in the sea, low to the shore and high in the center. Distant from the mainland about 250 meters and connected to it by a masonry bridge.

Moreover, the city, for its inexhaustible charm, is known as the “Pearl of the Ionian”. Gallipoli is a very lively city from the tourist point of view thanks to its enchanting landscape, its architectural and cultural richness. And also to the many entertainment centers that have turned it into one of the favorite destinations among young people.

What to see in Gallipoli?

Today Gallipoli, one of the most dynamic tourist destinations in Salento, is a commercial and seaside resort as well as a seaside resort. Flourishing in the past, it still owes its fortunes to the sea: the port has different berths for pleasure boats, fish and merchant. Fishing is of great importance .

The Port and the Fish Market

Experiencing the Port of Gallipoli is absolutely an experience to do if you plan a holiday in Salento. The fish market of Gallipoli is one of the most characteristic of the whole Salento and is appreciated and visited not only by connoisseurs and restaurateurs of the area, but also by tourists. In reality there are two ports, one merchant and the other called Porto Antico where moor the hoists, the typical boats used by Gallipoli who are constantly dedicated to fishing throughout the year ensuring fish of incredible freshness. The moment of sunset is the most beautiful and fascinating because the fishing boats and the paranze re-enter and the port is crowded with tourists and citizens who are preparing for the “great binge”.

The Hellenistic Fountain, the Church of Santa Cristina and the Sanctuary of Canneto

In the ancient fishing port there are the Hellenistic Fountain, the Church of Santa Cristina and the Sanctuary of Canneto.

The Hellenistic fountain is classified as the oldest moumentale fountain in Italy. The façade is divided into three parts by four caryatids that support the lintel with a rich decoration and is about 5 m high. In the bas-reliefs, obtained from local hard stone slabs, are sculpted scenes representing the three metamorphoses of the mythological Dirce, Salmace and Biblide.

A few meters from the fountain, near the sea, there is the Church dedicated to Santa Cristina (16th century). On the altar a golden niche holds a papier-mâché statue representing the Saint

The Sanctuary of Canneto is a building dating back to the twelfth century, rebuilt at least a couple of times during its history. It would have been destroyed in the second half of the 600 and rebuilt with a rectangular plan with three naves.

Located on the eastern outskirts of the island, it defended the only access to the city; it preserves a powerful quadrilateral plan, with angular towers and is now in the building made by the Aragonese and the Spanish, on previous Angevin buildings.

But even more important is the Cathedral Basilica of Sant’Agata, located in the historic centre of Gallipoli – a structure in the style of Lecce Baroque whose construction dates back to the period of the Counter-Reformation in which the baroque and sumptuous themes are the rule. In fact it was built from 1629 to 1696 and the project is the work of the Gallipoli architect Giovan Bernardino Genuino.

The Cathedral is located on the same place where there was a small church in the Middle Ages that was destroyed since the seventeenth century.

The municipal museum of Gallipoli was established by the naturalist doctor Emanuele Barba who in 1873 had asked the municipality to set up a “zoological and mineralogical cabinet” which was then transformed into a “naturalistic museum” and housed in the premises of the diocesan seminary. Library and museum were transferred to the new institute specially designed, in 1895, by the architect Francesco Barba and built on the site of the ancient civic hospital on Via A. De Pace. The bibliographic collections preserve rare editions of the fifteenth and sixteenth century Italian and foreign typographic, valuable Neapolitan editions of the eighteenth century and documents of the history and culture of Salento, including Salento editions of the ‘600 and’ 700, manuscripts and documents from the ‘400 to’ ‘800, iconographic and topographical material relating to the territory and the city of Gallipoli.