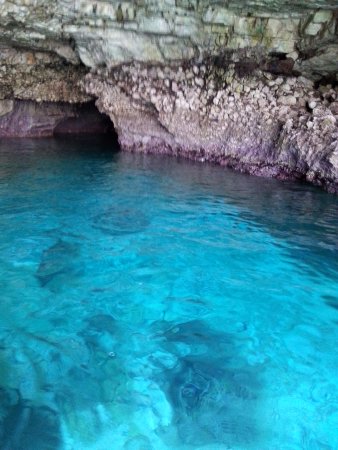 Passing Punta Ristola is the small cave of Mesciu Gianni, characterized by a pile of stones and debris positioned on the right wall.

So, starting from Santa Maria di Leuca you can head west and, after passing Punta Ristola, head towards Gallipoli. In this stretch of coast there are several caves to admire and many places to make a stop to treat yourself to a swim

Mostly, the Cave of Mesciu Gianni, of small dimensions, is characterized by a series of stones and debris deposited on the part desta.

The “Mesciu Scianni Cave” is found in a small bay along the coast towards San Gregorio.

HISTORY OF THE CAVE OF MESCIU GIANNI

The name is given by such mesciu Scianni, as well as master Giovanni, because it is said that such “Mesciu Gianni”, a fisherman of Leuca, went there to collect stones of various colors, to make polychrome mosaics.

In addition to this, the various colors of the rock at the entrance of the cave give the water extraordinary reflections.

To visit these beautiful sea caves of Santa Maria di Leuca you can rent a boat with or without a boat license or take part in one of the guided excursions in boat or customized according to your needs.

Cave of the Tre Porte